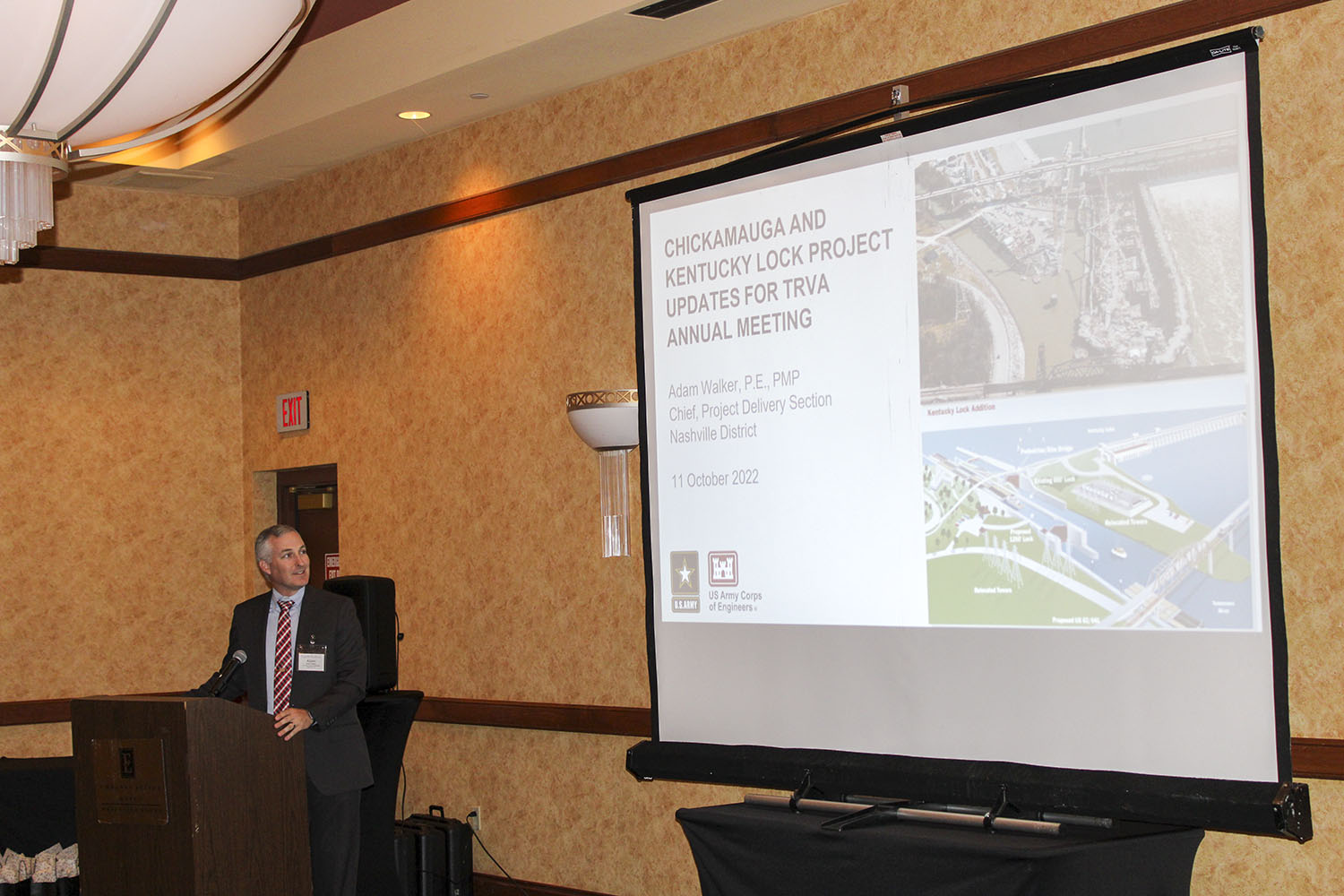 Projected timeline extensions and cost overruns on major construction and rehabilitation projects and the need for ongoing funding to replace aging infrastructure were some of the topics discussed at the combined 56th annual meeting of the Tennessee River Valley Association and Tennessee/Cumberland Waterways Council October 10-11 in Franklin, Tenn.

About 40 people attended the meeting, which included an in-depth look at navigation projects on both the Cumberland and Tennessee rivers.

Executive Director Cline Jones said that after the Bipartisan Infrastructure Law (BIL) passed with included funding for projects such as the Kentucky Lock Addition Project, he had been optimistic, but that was tempered somewhat as the Corps of Engineers completed re-evaluations to costs and scheduling.

“I was just giddy when the investment act came up with enough money to fund Kentucky to completion, and Sen. (Lamar) Alexander had it pretty well set up to fund Chickamauga to completion,” he said. “We were pretty disappointed to see that after evaluation, both of those projects were going to go on a few more years.”

Adam Walker, chief of the Nashville district’s project delivery section, told those at the TRVA meeting that the district expects to publicly release the new estimated cost and project completion date for the Chickamauga Lock Replacement Project in November.

Continued degradation of the existing lock at Tennessee River Mile 471 is necessitating the replacement. The new 110- by 600-foot lock will pass nine barges per lockage as opposed to the existing 60- by 360-foot lock’s one barge per lockage. As a result, replacing it could reduce commercial transit times by 80 percent, the Corps has estimated.

In 2020, the Corps had estimated the Chickamauga project completion date as between November 2025 and August 2027. Walker said to expect an extension to that timetable. While delays have not fully been quantified, the lock chamber work appears to be taking about two years longer than expected, he said.

“They’re making a lot of progress, just a little slower than we anticipated,” he said.

Lt. Col. Joe Sahl, commander of the Nashville district, added, “The contractor at Chick has struggled to maintain the schedule, and we’ll talk through the implications of that.”

He was quick to add that this was not the fault of anyone working at the site but instead had to do with lingering impacts of COVID-19 and difficulty in obtaining a sufficient workforce. Additionally, he said, the work is now speeding up significantly.

“That’s encouraging, but it’s still not at the placement that we saw with this initial contract schedule,” he said.

Work on the total project is estimated at 50 percent complete as of September with $381.1 million expended, according to information Walker provided in his presentation.

Dustin Davidson, director-government relations for Waterways Council Inc. (WCI), said in his legislative update that the Inland Waterways Users Board (IWUB) was told at its August meeting to expect a project cost increase for Chickamauga of approximately $96.3 million. The Nashville Engineer District did not provide a figure at the TRVA meeting.

Davidson said other projects all over the country are also coming in above original estimates. Another example he gave was for the Lower Mon Project on the Ohio River, which he said the IWUB was told could have an increased project cost of $109 million and could need additional funds in fiscal year 2024.

The certified fiscal year ‘22 TPCS Update identified an additional funding need for the Kentucky Lock Addition Project of an additional $332 million, Walker said in his presentation. That is the same amount for the project indicated at the August IWUB meeting.

Walker gave an update on the progress of the Kentucky Lock project at Tennessee River Mile 22 as part of his presentation, saying the total project cost estimate as of this year is now $1,561,073,000, of which $456.5 million was included in the BIL.

Of the amount awarded in the BIL, a little more than half has been awarded.

“Right now we’re as volatile as we’ve ever been, and our contractors are saying the same things we are,” he said.

Instead of adjusting cost and schedule expectations every two years for these mega projects, he said, he believes it will be necessary to do some kind of reassessment every six months.

“Kentucky happened to be kind of at the forefront of that whole effort as we were all starting to see what the market was looking like,” he said of the reassessment that resulted in the new figures and schedule.

The earliest possible operational date for the new Kentucky Lock is now July 2029 with the baseline project completion date estimated as September 2030. Walker noted that the team is working on the remaining project scope and future contracts to minimize delays relevant to efficient annual funding needs.

Kentucky Lock’s delays are among the highest in the country, Walker said in his presentation. In the last three years, the average delay for vessels transiting it has been more than 10 hours.

Excavation of the downstream lock is 97 percent complete, with the required contract completion extended to October 21, 2022, as a result of a modification to treat solution features in the lock chamber foundation.

Thalle Construction, the contractor for the $380 million, fully funded downstream monoliths contract awarded in September 2021, was granted access to the pit on July 6 so that work could begin. The contract is scheduled for completion in May 2027. A lock operational contract is to follow with a planned award in fiscal year 2025 and estimated completion in September 2030, Walker said.

Walker noted the 2020 Capital Investment Strategy report was updated to prioritize funding for Inland Waterway Trust Fund (WTF) projects with ongoing construction, which includes both the Kentucky and Chickamauga projects.

Sahl said it is important not to get the wrong impression about schedule delays and cost increases at both Chickamauga and Kentucky.

Nikki Berger, TVA navigation program supervisor, gave a brief update on a guidewall at Wilson Lock and Dam that sank August 31, 2021, as the remains of Hurricane Ida passed through the region.

TVA is exploring temporary solutions based on the U.S. Army Engineer Research and Development Center’s model analysis using a system of barges, including the potential for salvaging the existing wall, she said. However, no determination on a temporary or long-term strategy have been made so far.

“When you have a big problem, you have to have big discussions about that problem,” she said.

She assured those in attendance, “TVA will be providing the helper boat to support lock operations until a temporary or permanent solution is in place.”

Sahl also said in his presentation that the Corps is working proactively with TVA to determine next steps.

TVA plans to communicate plans to the navigation industry and congressional stakeholders through a series of monthly meetings, Berger said, adding that would include both discussions concerning existing lock restriction impacts and the path forward.

Davidson said in his legislative update on behalf of WCI that rather than seeking to make the 65/35 split permanent, WCI is pushing for a 75/25 split in the final bill.

The Senate wording in the draft version of the 2022 bill includes the 75/25 split and $115 million from the IWTF. This scenario provides $460 million a year in construction funding, Davidson said.

However, the House Transportation and Infrastructure Committee is split on the issue in the House of Representatives. Ranking Member Sam Graves supports the inclusion of the inland waterways cost-share adjustment, but Chairman Peter DeFazio is apprehensive, Davidson said.

“We have been working very closely with both committees to make sure that cost-share adjustment is included in the final bills,” he said.

The House has passed six of the 12 fiscal year 2023 appropriations bills, with a six-bill minibus passing on a 220 to 207 vote on July 20. That leaves a lot of work to be done in a short amount of time, he said.

With money coming in for various projects, Davidson said part of what WCI is working toward is to make sure that work is “stacked” appropriately so that there are no unplanned shutdowns of any part of the inland waterway system.

Davidson also discussed project-specific funding, which is back for the second year after a 10-year moratorium on what used to be called earmarks.

In the House, representatives are allowed 15 total requests on the 12 total appropriations bills. Transportation requests are the most popular, with Energy and Water requests less so, he said.

In the Senate, there are no limits on requests for what is called “congressionally directed spending,” but not all senators participate.

When a congressional member is making a request for funding to benefit a particular project, Davidson said, “The most important voice is the businesses in the district.”

He urged businesses to write letters in support of funding when a project would be beneficial to them in order to boost its chances of inclusion in a final bill.

Patrick DiNicola, acting chief of the maintenance section in the Nashville district, briefly reviewed projects completed in fiscal year 2022 and looked ahead to closures already scheduled in 2023.

Dredging is scheduled at Cumberland City, Cheatham Dam and Dover at Cumberland River Miles 104, 102 and 88 between October 5 and November 18, he noted. End dates for the dredging are pending and may be adjusted.

From April 25 to May 11, Barkley Lock at Cumberland River Mile 30.6 will close for miter gate sector gear replacement.

Lyndi Berrones, regional director for Greater Nashville for the Tennessee Department of Economic and Community Development, talked about economic development wins for the state.

Howard “Doc” Whitaker, chaplain associate for the Seamen’s Church Institute, talked about how the organization can help with critical incident stress management (CISM) and other services.

Other topics Jones briefly mentioned as important issues for TRVA members to follow moving forward included following up regarding permitting projects in the Tennessee River, plans for expansion of the Port of Florence in Alabama, promoting Tennessee’s public ports and moving toward the return of seasonal navigation on the Chattahoochee River.