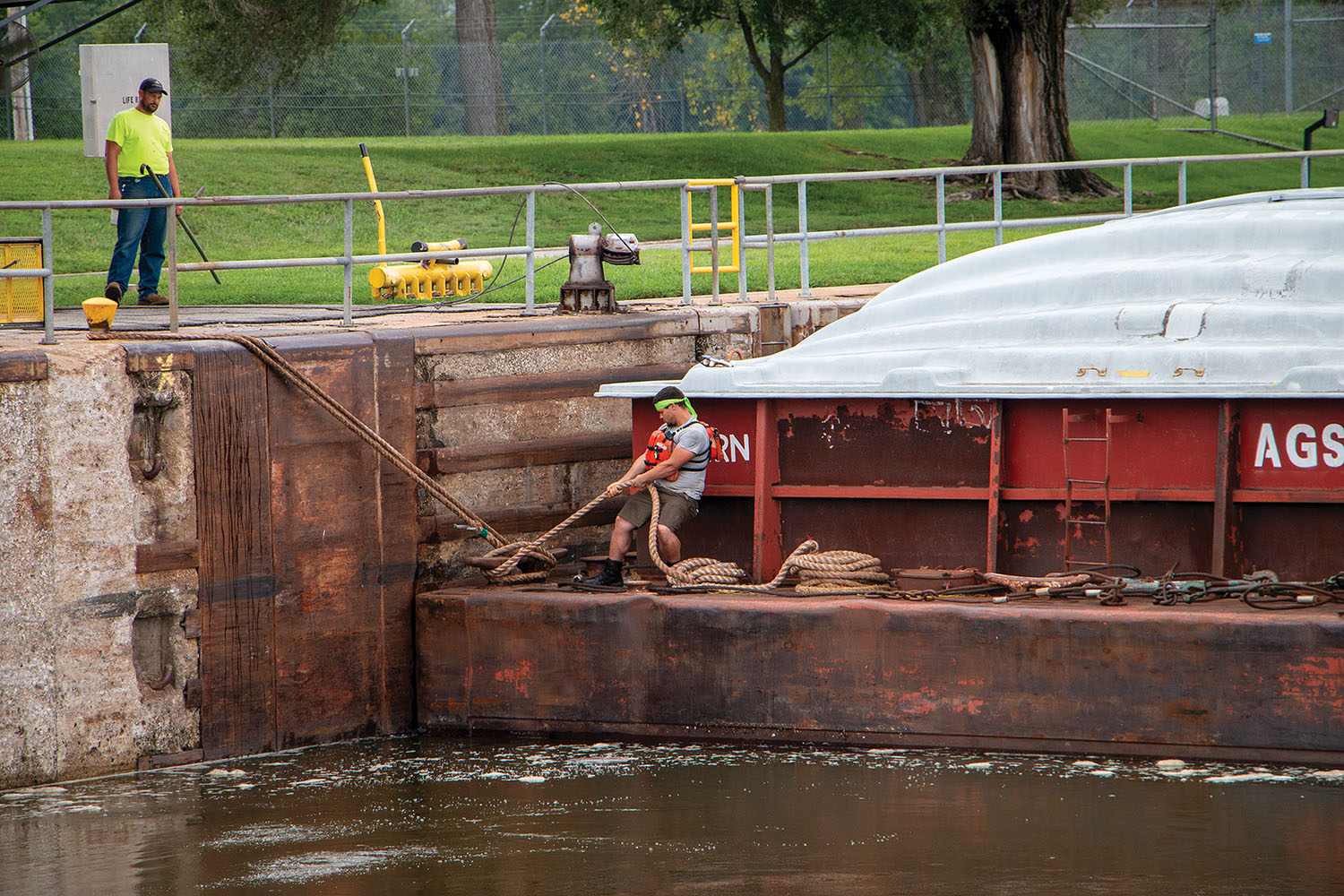 A group of invited guests recently spent two days in the St. Louis area on a media tour organized by Debra Calhoun, Waterways Council Inc.’s senior vice president. Calhoun is a veteran of many such tours, which are an important way to educate elected officials, among others, about the importance of the waterway system and the barge industries that move our country’s cargoes.

Guests included journalists from the Waterways Journal, St. Louis Post-Dispatch and Marine News, agriculture journalists from several publications, along with representatives of the National Corn Growers Association and the American Soybean Association.

The morning’s topic focused on the Navigation and Ecosystem Sustainability Program, which links together navigational improvements with ecosystem restoration and enhancement. The WCI has always been a strong supporter of NESP, seeking that linkage since even before its authorization in 2007.

NESP went unfunded for years but received a tranche of funding from the Infrastructure Investment and Jobs Act. Projects authorized under NESP include fish passage structures at Lock and Dams 4, 8, 22 and 26; island building; floodplain restoration; backwater and side-channel restoration, island and shoreline protection; and spillway, dam and levee modifications.

On federal refuge lands, the federal government pays 100 percent of NESP costs; on other lands, it pays 65 percent, with local sponsors making up the other 35 percent. The NESP area includes the Upper Mississippi River from St. Paul to the confluence with the Ohio River and the Illinois Waterway from Grafton, Ill., though the Thomas J. O’Brien Lock in Chicago.

NESP’s navigation features include the addition of 1,200-foot locks to seven older locks and dams that were built in the 1930s, all of which still have only 600-foot locks that require lengthy and costly tow break-ups for towboats with big tows to traverse.

Andy Schimpf, P.E., rivers project manager and navigation business line manager for the St. Louis Engineer District, welcomed guests to the Audubon Center, a building located in the Riverlands, a wetland and bird sanctuary located just across the Mississippi River and slightly upstream from Melvin Price Locks and Dam north of St. Louis, Mo., just above the confluence with the Missouri River.

After being introduced by Schimpf, Ken Buchholz, director of the Audubon Center, began his presentation. “Our brand is birds,” he said. The Audubon Center is one of 34 centers nationwide but is unique for the close partnership it enjoys at this location with the Corps. The building it occupies was built in 2010 with funds from the American Recovery and Reinvestment Act.

The surrounding sanctuary occupies almost 4,000 acres of partly forested wetland bottoms, a type of habitat that used to be widespread but is increasingly rare. It’s an ideal habitat for many types of wildfowl and migrating birds and is a key stop on the Mississippi Flyway that is critical to more than 350 bird species. The bird sanctuary follows a winding stretch of riverbanks and is criss-crossed with backwater eddies, streams and ponds. Its maintenance is authorized as part of the Melvin Price Locks and Dam project.

The bird trails at the Audubon Center attract lots of bird-watchers, many of whom enter their sightings on a global, web-based bird-sighting registry called eBird. “It’s a real bird diversity hot-spot,” Buchholz said. The area has  one of the best concentrations of bald eagles since their population began to recover in the 1990s. “Around February, you can see the cars lined up on the access road,” Buchholz said.

The gravity-fed pools, streams and backwaters in the bird sanctuary were designed by a Washington University space engineer and built by student volunteers, according to Buchholz. The area is a favorite haunt of trumpeter swans, an “indicator species” of wetlands health. The center features a MOTUS wildlife tracking tower, which tracks tagged birds. Buchholz said he is convinced it will soon be able to track Monarch butterflies as well.

The Audubon Center sees its mission as threefold, Buchholz said: conservation, science and public education. As part of its conservation mission, Audubon teams recently completed a nine-week survey of 50,000 acres of floodplain forest. “We are always looking for solutions that bridge ecosystem needs with navigation needs,” he said.

The education component of the center’s mission focuses on marginalized and excluded communities, Buchholz said, which means working closely with school systems that have low-income students. There were many signs of the child-focused events the center regularly hosts, including chalk drawings on the pavement.

Afterward, guests took a short drive across the river to The National Great Rivers Museum at Melvin Price Locks and Dam. There they enjoyed a box lunch while listening to Schimpf talk about how congressional funding of the Corps and NESP works. The Corps has an baseline budget for operations and maintenance but shares the cost of major rehab or recapitalization of locks and dam projects with the Inland Waterways Trust Fund.

Marty Hettel, current member and former chair of the Inland Waterways Users Board, a congressionally chartered committee of industry representatives that advises the Corps on how to invest IWTF funds, explained that the IWUB includes representatives not only from the barge industry itself, but from all its customer industries, including agriculture companies, fertilizer makers and producers of aggregate.  The money in the IWTF is collected from the barge industry in the form of a fuel tax.

The group had a tour of Melvin Price Locks, where the main chamber is scheduled for a lengthy closure for lift-gate replacement this winter. They got to watch up close as the tow of the mv. Tee Golding locked through southbound.

The party then walked along the bank before boarding ACBL’s mv. Mike Weisend for a cruise down to the confluence and back. Patrick Sutton, CEO of ACBL, was on hand to answer questions and educate the group about operational aspects of towboats. The group was shepherded by Port Capt. Adam Nunally. Deckhand Donovan Schwartz gave a safety briefing, and Engineer Evan Mickelson showed the guests the spotless engineroom. The day was warm but overcast, and guests saw dozens of barges tied up along both banks, along with many towboats.

Finally, guests gathered in the wheelhouse, where Capt. Ronnie Hughes and Sutton answered more questions about towboat operations and the wheelhouse equipment. Sutton spoke of ACBL’s strong “promote from within” culture and the necessity of getting the word out about the fulfilling and high-paying careers available to young people on the river, without a college degree or even a high-school diploma required, although he stressed that a lot of hard work, training and study are still required to become a captain.

The following day, the group traveled upriver to Lock and Dam 25, which will be the first lock to see major improvements under NESP. Speakers pointed out that while Melvin Price Locks and Dam is the newest facility on the Upper Mississippi River, it is already more than 30 years old. Like the other facilities, Lock and Dam 25 was built in the 1930s, and has only a 600-foot chamber.

Tour participants received a vivid demonstration of the need for modern lock facilities when a 16-barge Marquette Transportation tow arrived at the lock northbound. Visitors watched as the tow entered the lock and was broken into two cuts so the first nine barges could be locked through. Only after the first cut was pulled through with a “mule” were the remaining barges and towboat allowed to enter the chamber to be locked through and eventually recoupled with the first cut. By that time, most of the tour participants had left to catch their flights back home.

And not only does breaking tows into multiple cuts take a lot of valuable time, but the process adds significant safety risks to towboat crews, as well as increased emissions from towboats that have to idle through the sometimes-hours-long delay.

Speakers noted that those impacts are repeated every time a tow has to pass through a 600-foot chamber—dozens of them if the tow is going all the way to St. Paul, Minn.

Jose Lopez, the program manager for the Lock and Dam 25 Project, outlined the process by which the new 1,200-foot lock will be built at the facility. When the lock and dam were constructed, a contingency was left for a possible future additional 300-foot lock chamber between the 600-foot chamber and the dam; that space will be utilized for the new 1,200-foot chamber.

The first phase of the project will be to prepare the riverward wall of the existing chamber; that wall will be extended and become the wall of the new chamber. That contract is expected to be awarded this winter. The second, larger phase will be to build the other wall and additional lock machinery. All construction will be “in the wet,” using techniques pioneered at Charleroi Locks on the Monongahela River.

(John Shoulberg contributed some information for this story.)

Caption for top photo: A deckhand has to halt the progress of the tow’s first cut of barges through Lock and Dam 25, described as one of the most difficult and dangerous parts of the double-locking process. (Photo by John Shoulberg)