Tracy Zea is president & CEO of the Waterways Council Inc.... 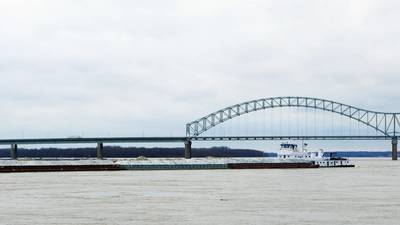 The inland waterways have enjoyed several positive developments toward modernization of the system, particularly over the last two years.

Annual appropriations that fund the U.S. Army Corps of Engineers’ Civil Works mission have been steadily on the rise for the last nine fiscal years, specifically the Construction and Operations & Maintenance (O&M) accounts have been funded at historic levels. The passage of the Infrastructure Investment and Jobs Act (IIJA) in 2021 provided a once-in-a-generation opportunity to see real progress to build locks and dams and to upgrade the rest of America’s long-neglected infrastructure. And the Inland Waterways Users Board (IWUB), a critical conduit between the industry and Congress, is back in business after being temporarily halted, among other federal advisory groups during a federal review.

After much debate on Capitol Hill and in the Administration, on August 10, 2021 the Senate approved the IIJA (Infrastructure Package). The bill provided $2.5 billion of full federal funding for the construction and major rehabilitation of inland waterways projects. For context, the funding level was roughly a $2 billion or 400% increase from the last significant infrastructure funding package passed in 2009.

The following projects were funded in IIJA: 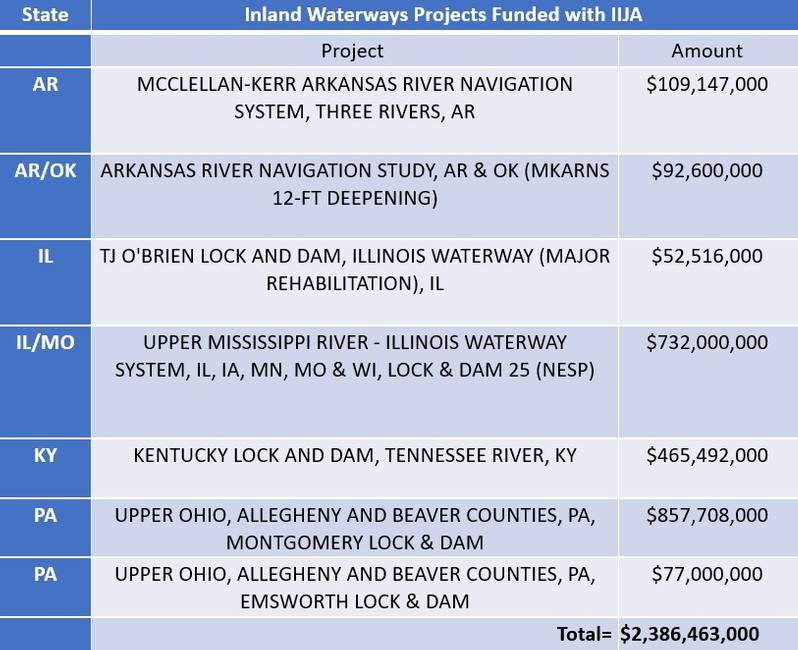 Also, $4 billion was provided in IIJA for the Corps’ O&M account for all business line items within the Corps’ Civil Works mission.

WCI expressed its gratitude to the Administration and to Congress for working together to develop and pass the critical IIJA infrastructure bill, which recognized the needs and necessity of the U.S. inland waterways system.

For the Corps of Engineers, the House FY23 bill provided $8.9 billion, an increase of $545 million above the FY22 level and $2.288 billion above the President’s budget request.

Specifically, for the Investigations account, the FY23 bill provided $160 million, an increase of $17 million above FY22 and $54 million above the budget request.

For the Construction account, the bill provided $2.475 billion, an increase of $1.254 billion above the request.

The Harbor Maintenance Trust Fund will fund projects at an estimated $2.318 billion, an increase of $269 million above the FY22 level and $592 million above the budget request, in accordance with the budgetary adjustments made by the CARES Act and the Water Resources Development Act of 2020.

And a step in the right direction for lock modernization on the Upper Mississippi River in FY23 was a $49.3 million earmark, now known as Community Project Funding (CPF), for Lock and Dam 25 as part of NESP. Authorized in 2007, NESP will modernize seven locks on the Upper Mississippi River (five on the Mississippi and two on the Illinois Waterway). At the same time, NESP will fund ecosystem restoration programming and monitoring for the sustainability of our nation’s vital river system. Waterways champions Reps. Cheri Bustos (D-Ill.), Sam Graves (R-Mo.), Darin LaHood (R-Iill.) and Blaine Luetkemeyer (R-MO) requested the NESP earmark in the FY23 appropriations bill. NESP was the only project to receive CPF among inland waterways construction projects.

The Water Resources Development Act (WRDA), the every-other-year policy bill that legislates water resources projects, is back on its biennial schedule since 2016. On May 4, 2022, the Senate Environment & Public Works (EPW) Committee marked up and unanimously passed its version of WRDA of 2022.

WCI continues to advocate for its inclusion in the final bill that is expected to be negotiated in conference by the House and Senate sometime this summer. In mid-July 2022, Reps. Chuy Garcia (D-Ill.) and Rodney Davis (R-Ill.) led a support letter endorsing changing the cost-share to 75%/25% that was signed by 75 House members.

Commercial transportation stakeholders of the inland waterways are one of a few industries that have a Congressionally-mandated board – Inland Waterways Users Board (IWUB) – that makes recommendations about investment decisions related to the inland waterways system and its infrastructure and maintenance needs. On February 2021, the IWUB, and all Department of Defense (DoD) Advisory Committees, were temporarily disbanded while the DoD conducted a zero-based review under the then-newly inaugurated Biden Administration.

After the review was conducted, in July 2021, the Secretary of Defense approved the reinstatement of the IWUB. However, the IWUB was not officially repopulated with maritime companies across the system until February 2022.

Critically important, the IWUB is comprised of the following organizations and their representatives:

Now reinstated and repopulated, the IWUB held its first meeting of the year (its 96th meeting overall) April 19-20 in New Orleans, with the discussion focusing on the progress of the IIJA funding, FY22 appropriations, the FY23 President’s Budget, and FY23 construction capabilities.

The biggest revelation of the IWUB’s April meeting revolved around the Kentucky Lock Addition on the Tennessee River. Its construction of a new 1,200-foot chamber officially was authorized in 1996. Kentucky Lock Addition project was presumed funded to completion with the $465.49 million received from IIJA. But the Corps last year made a contracting decision on the downstream lock monolith contract to go from a 48-month to a 67-month contract, which will now move the operational date from 2025 to 2029, and full completion not until 2030. Kentucky Lock’s new estimate is $1,561,073,000. The $465.40 million will fund work to 2025 when IWTF funds will be required.

In the good news category, it was reported at the IWUB meeting that $39 million provided in the FY23 President’s Budget funds Chickamauga Lock on the Tennessee River to completion.

The IWUB meeting was attended by Assistant Secretary of the Army (Civil Works) Michael Connor who discussed the impact of the industry as it relates to the Administration’s priorities, particularly addressing climate change and applauding the industry for its environmental record.

The IWUB will hold its 97th meeting and associated tour August 16-17 in Walla Walla, Wash., with a tour of the Snake River Ice Harbor Lock and Dam.

Again, it’s an overall very good news story for the inland waterways and its many beneficiaries, and WCI’s valued members.