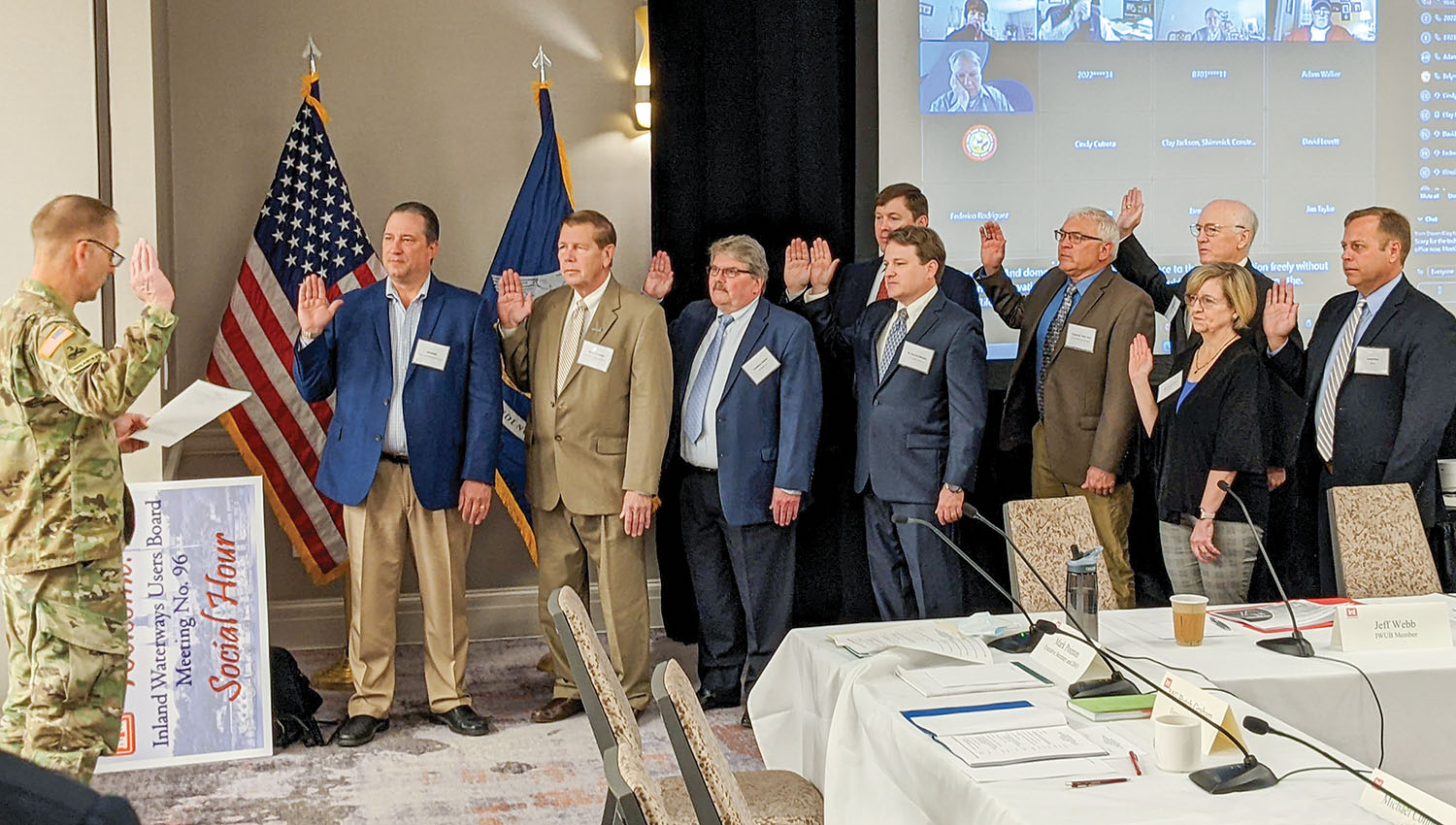 The recently reconstituted Inland Waterways Users Board (IWUB) held its 96th meeting April 20 in New Orleans, and learned, among other things, that completion of the Kentucky Lock Project is being delayed by three years.

The group toured Bayou Sorrel Lock and the Inland Harbor Navigation Canal Lock, which both connect the Mississippi River and the Gulf Intracoastal Waterway, the day prior.

The meeting opened with the swearing in of the members of the board by Maj. Gen. Butch Graham, deputy commanding general for civil and emergency operations with the U.S. Army Corps of Engineers and the IWUB’s executive director.

In his opening remarks, Graham expressed how thankful he was that the Inland Waterways Users Board was reactivated after being dissolved, along with other federal advisory committees, shortly after President Joe Biden took office in January 2021. He emphasized the importance of trust for the success of the board and its relationship with Congress, the Corps and the administration.

“The saying goes, ‘You lose trust in buckets, and you gain trust back in drips,’ ” Graham said. “I’m glad they had this board reconstituted because we’ve got to continue to bank those drips and drops.”

Spencer Murphy, general counsel and vice president of risk management for Canal Barge Company and IWUB chairman, stated in his opening remarks that the board finds itself in a significant point in time, with a robust number of projects within sight of completion. At the same time, the need to build and maintain an efficient and reliable inland waterway system through the Corps’ Capital Investment Strategy and massive federal appropriations like the Infrastructure Investment & Jobs Act has never been greater, he said.

“The Capital Investment Strategy is the best tool we have to organize this massive workload into a prioritized plan that provides the best value to the nation,” Murphy said. “Capitalizing on this funding opportunity becomes even more important when you consider the current political and economic climate. For the first time in my professional life, the public is suddenly very interested in supply chains. We’re also witnessing massive disruptions in food and energy markets caused by the war in Ukraine.

“Now more than ever, our ability to move goods on the inland waterway system provides a vital role in feeding the world and ensuring domestic energy security,” he added. “Our inland waterway system is the best in the world, giving the U.S. a strategic advantage on many fronts. But we must continue to modernize the system if we’re to keep that advantage.”

Matt Woodruff, vice president of public and government affairs for Kirby Corporation and an Inland Waterways Users Board veteran, recounted how, starting about 15 years ago, the board, through the Capital Investment Strategy, switched from an emphasis on starting projects to completing them. Now, through discipline and proper funding, there is real momentum in projects.

“I’m excited that we’re really turning a corner and can ask ‘What’s next?’” he said.

Michael Connor, assistant secretary of the Army for civil works, attended part of the meeting and took the opportunity to both express the Biden administration’s priorities for civil works projects and to receive input from board members.

Woodruff pointed out that one advantage of towing vessels that enhances their environmental stewardship is that they can be updated with new technology and cleaner-burning engines over the course of their lifetimes.

Jeff Webb, president of Cargill Marine & Terminal, discussed how civil works projects like the Mississippi River deepening in Louisiana lead companies like his to invest in facilities and, in turn, create more jobs.

Murphy voiced concern over Bayou Sorrel Lock, which will likely slide to a Tier 4 project on the Corps’ Capital Investment Strategy list, meaning it will need a new start/new study before it can be eligible for authorization or appropriation. Murphy pointed out that Bayou Sorrel’s relatively low benefit-cost ratio is based on its navigation use alone. Bayou Sorrel, Murphy said, also has a flood protection role and an environmental role.

“One dollar hits all three of those benefits,” Murphy said.

Another point Murphy made on Bayou Sorrel was that, in the case of a hurricane hitting New Orleans, Bayou Sorrel becomes the only connection point between the Gulf Intracoastal Waterway and the Mississippi River.

Corps officials went on to brief the board on a wide range of projects throughout the inland waterways. The Corps is studying the possibility of instituting remote lock operations.

“We’ve got to evolve,” Graham said. “We know the technology is solid. We can figure this thing out.”

The Corps may consider a pilot project at a particular lock on the system, officials said. Another option may be to staff a low-use lock during daylight hours, but then operate the lock remotely at night.

The biggest news that came out of the Users Board meeting was the completion delay and anticipated cost increase announced for Kentucky Lock. Just three months ago, news broke that $465 million had been earmarked from the IIJA to cover the completion cost of Kentucky Lock, with the completion date just three years away. However, Graham told the Inland Waterways Users Board that, due to mistakes in cost and construction estimates, the target completion year is now 2028, moved back from a previous target date in 2025.

“We had, in my words, an overoptimistic delivery date,” Graham said. “We ask folks to be aggressive, but we asks folks to not be unrealistic.”

Graham said that further discussions with contractors interested in the next phase of construction at the lock revealed the likely rise in costs for completion. In particular, the current cost of materials, labor issues and COVID-related issues led to the anticipated price increase. Stephanie Hall, deputy district engineer for the Nashville Engineer District, said that, despite the huge allocation from the IIJA, the increases in cost estimates and timetable mean the project will need an additional $235 million to $355 million in funding.

“The market changes, and we realize that our project delivery team was being a little bit too optimistic in what we were telling you of how long it was going to take and how much it was going to cost,” Graham said, “so we’re here to account for that.”

“We thought we had, and certainly Congress thought we had, all the money to finish this, because that’s what we told them,” Graham said. “Now we know that, more than likely, to finish Kentucky out it’s going to take somewhere between $355 [million] and $235 [million], somewhere in there. That’s the additional draw on the Trust Fund, and we’re working to see what those funding opportunities are going to be.”

Caption for photo: Members of the Inland Waterways Users Board are sworn in before their April 20 meeting in New Orleans. (Photo by Frank McCormack)