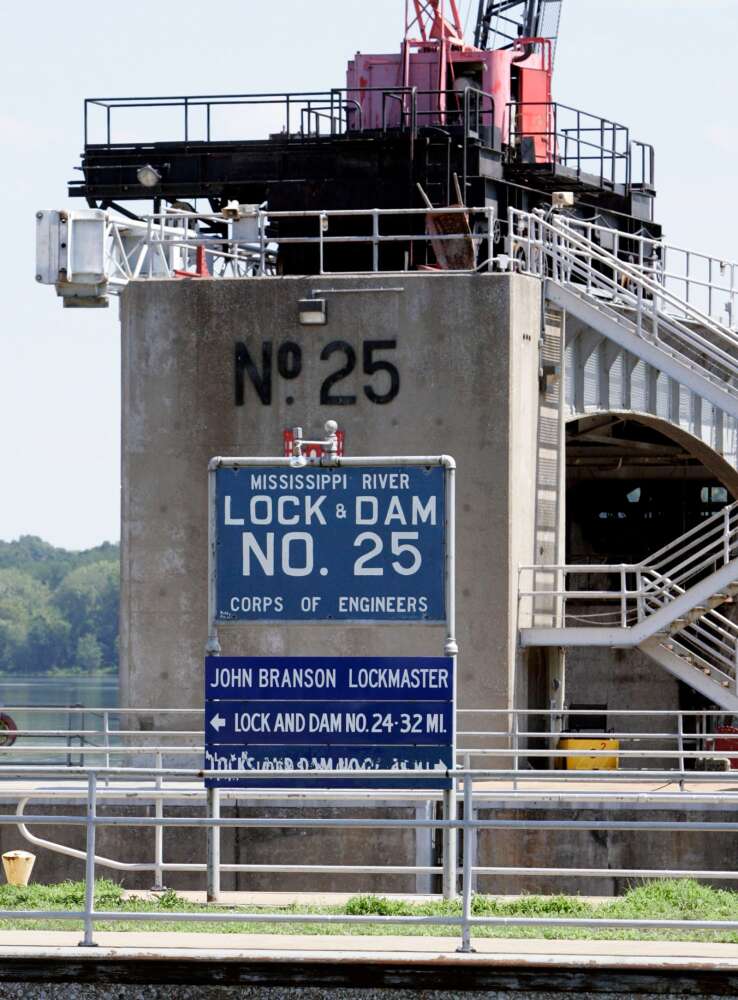 After years of funding delays, the Army Corps of Engineers announced plans Wednesday to spend over $829 million on modernizing locks and dams on the Upper Mississippi River, including an infamous bottleneck north of St. Louis that farmers say is crucial to their ability to sell grain overseas.

The announcement, which comes after Congress passed the bipartisan $1.2 trillion Infrastructure Investment and Jobs Act, represents the single largest investment to Mississippi River locks and dams since their original construction in the 1930s, according to the Waterways Council. The Washington-based public policy organization has pushed for additional funding for modern and well-maintained national system of ports and inland waterways, including lock and dam infrastructure.

Specifically, the funding will be used to complete the modernization of Lock & Dam 25 north of St. Louis, including the construction of a new 1,200-foot lock, as well as an environmental restoration project at Lock & Dam 22 in Missouri and other small-scale ecosystem and navigation projects in the region.

According to a study prepared for the National Waterways Foundation and the U.S. Maritime Administration, estimated costs of an unplanned closure of Lock 25 alone would result in a $1.57 billion loss to the economy, impacting 132 counties in 17 states.

Almost every bushel of soybeans and corn shipped on the Mississippi River from Iowa, Illinois, Minnesota, Missouri and Wisconsin come through Lock 25 to export facilities near the Gulf of Mexico, said Mike Steenhoek, executive director of the industry group the Soy Transportation Coalition, told the St. Louis Post-Dispatch. The planned upgrades would allow the transit time for a typical 15-barge tow to be cut to 30-45 minutes from two hours, he told the newspaper.

Iowa and Illinois lawmakers say the funding will finally speed long-delayed replacement of river locks that are well beyond their 50-year design life and cannot accommodate modern tows. Most of America’s locks and dams were built in the 1920s and 1930s.

Congress originally authorized Upper Mississippi River locks modernization back in 2007, but no construction funds were appropriated until this fiscal year.

The federal program will modernize and expand seven outdated locks at the most congested lock locations along the upper Mississippi and Illinois rivers as well as fund more than $2 billion in ecosystem restoration and create nearly 50 million person-hours of living wage construction jobs, according to lawmakers.

In addition to facilitating the movement of about 630 million tons of cargo a year valued at $232 billion, the inland waterway system supports more than a half million jobs, according to U.S. Sen. Chuck Grassley, R-Iowa.

Grassley was the only one of Iowa’s five Republicans in Congress to vote for the bipartisan infrastructure bill, but he was not alone in praising the Army Corps announcement.

“Iowa’s agriculture, manufacturing and shipping industries rely on a functioning and efficient lock and dam system along the Mississippi River to move goods. It’s an issue I often hear about during my 99 county meetings and regularly raise with the Army Corps of Engineers, so I’m pleased to report that the they’ll be investing more than $829 million for updates to these locks and dams,” he said in a statement Wednesday. ”When I voted for the bipartisan infrastructure bill, I was voting for exactly this type of federal support for critical infrastructure that Iowans depend on.“

U.S. Rep. Ashley Hinson, R-Marion, had partnered with Rep. Cheri Bustos, D-Moline, in including funding for locks and dams in a separate U.S. House bill — but she did not join Grassley in voting for the bipartisan infrastructure bill.

However, she later joined in a letter to the Army Corps to encourage it to prioritize lock and dam upgrades.

"The lock and dam system along the Upper Mississippi River is critical to Iowa’s agriculture economy and our country’s entire supply chain," Hinson said in a statement Wednesday. "(T) his landmark investment will be game-changing for Iowans and communities along the Mississippi River like Dubuque. Over 60 percent of our nation’s grain exports travel through this lock and dam system, and it is a massive economic engine for the entire state."

Democrats jumped on her for praising a bill she didn’t support.

“Despite Ashley Hinson’s attempt to claim credit for this much needed investment, she voted against the bill that made it possible,” said a statement from state Sen. Liz Mathis, D-Hiawatha, who is challenging Hinson in the 2022 election. “This is yet another example of Ashley Hinson claiming that she supports investments that benefit Iowans, but voting along party lines against their best interests in Washington.