Demolition Time Extended at L&Ds 52 and 53

High river levels have caused delays in demolishing what is left of locks and dams 52 and 53 along the Ohio River.

The opening of the Olmsted Locks and Dam in August 2018 made 52 and 53 obsolete, eliminating a frequent bottleneck for tows. The dams were in place for nearly 90 years. Each included the 600-foot original lock and a 1,200-foot lock added decades later that was supposed to have been temporary.

Olmsted’s twin 1,200-foot locks eliminated the need to break up and reassemble tows and prevented hours of delays along one of the most heavily traversed stretches of the navigable inland waterway system.

Demolition of Locks and Dam 53, near Grand Chain, Ill., began shortly after the Olmsted Dam was put into operation and was planned for two phases. Phase 1 was planned to eliminate much of the structure, including the timber wickets first used in the 1920s. The contract was originally budgeted to end in September, but was then extended until November 30 because of high water.

Persistent high water prevented much of the work from being done on time, said Doug Harman, chief of quality assurance with the U.S. Army Corps of Engineers in Olmsted, Ill. He cautioned that a formal survey isn’t complete, but estimated about 65 percent of the work anticipated for the first phase was complete. A contract for Phase 2 of the demolition is expected to be let for bid in spring 2020 and will include the remainder of the lock demolition. It is expected to be awarded in May or June 2020, subject to the availability of funding, Harman said.

The demolition of Locks and Dam 52, near Brookport, Ill., also got off to a slow start, said Steve Smith, the Corps’ quality assurance representative overseeing the project. The contract for the demolition at 52 was let in October 2018, but contractor C.J. Mahan Construction Company LLC didn’t mobilize until June of this year because of high water along the Mississippi pushing up water levels on the lower Ohio, including at the dam site.

“We are currently about 20 percent complete at 52,” Smith said.

The 800-day firm, fixed-price contract calls for 52’s demolition to be completed in late December 2020. Meeting that deadline appears to be a challenge because of the high water, Smith said, adding that if the contract is extended he does not know for how long that would be.

The demolition of Locks and Dam 53 has been particularly challenging since Olmsted’s minimum elevation when being held at pool is 295 feet.

“Once we put Olmsted in operation, you would never see the top of the concrete of 53, so all the demolition of 53 had to be done underwater,” Harman said.

He described the demolition as akin to working while blindfolded much of the time, although technology helped crews to see what human eyes could not.

“All of the barges and boats were equipped with GPS, and you have barge engineers who would help the equipment get on location,” Harman said.

As the portion of the Ohio near the confluence with the Mississippi River rose in response to the unprecedented high water along the Mississippi this year, much of the work had to stop at 53, however. The track hoes and impact hammers can only work up to the elevation of 313 feet, Harman said. Although the low velocity of the current allowed divers to complete removal of the hydraulic system and miter gates, demolition work with the heavy equipment was effectively placed on hold.

In the latter half of this year, as the Mississippi fell, rainfall along the upper Ohio once again led to high water. Now, with the expiration of the contract with AECOM and joint venture partner Alberici November 30, no more work is being completed on 53’s demolition until the second phase of the contract is let out for bid.

In contrast with 53, dam 52 is normally out of the water, meaning explosives are used to blast away remaining locks and dam features. In a public meeting in August, the Corps discussed plans for twice daily blasts Monday through Saturdays. Blasts have been on hold since the Thanksgiving holiday because of high water, Smith said.

Once the demolition is complete at both of the antiquated dams, all of the rubble will be removed to a 280-foot elevation at the former 53 and to 282 feet at the former 52, allowing a 15-foot draft at minimum pool. As to where all that crumbled concrete is going, the rubble will be used to fill the former land-side lock chamber at 53 and to transition from the chamber floor to the land-side lock wall at 52, the men said.

Caption for top photo: An explosive blast earlier this year is used to remove the downstream lock approach wall at Locks and Dam 52 on the Ohio River near Brookport, Illinois. (Photo courtesy of Louisville Engineer District)

For more photos, see the slideshow below: 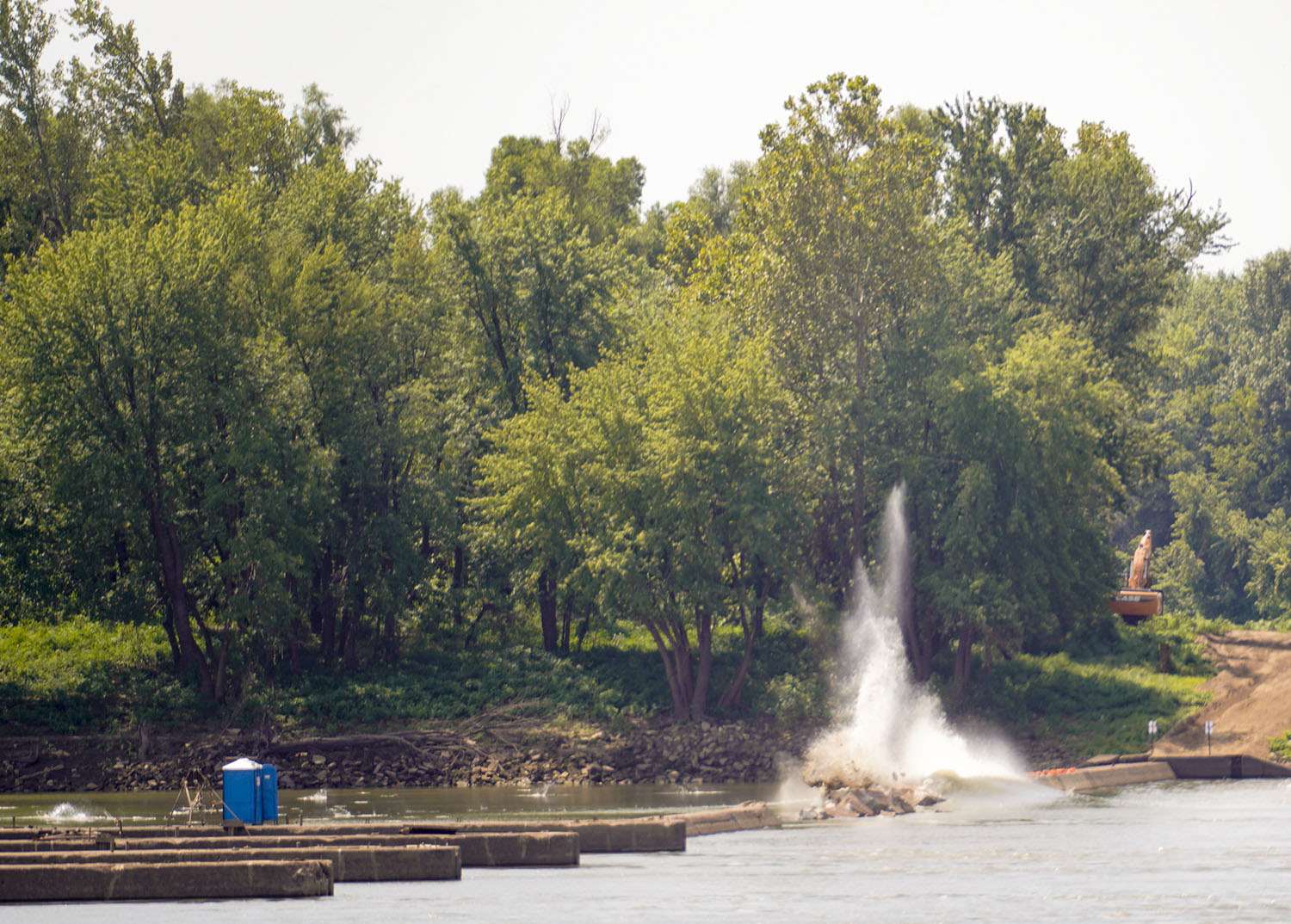 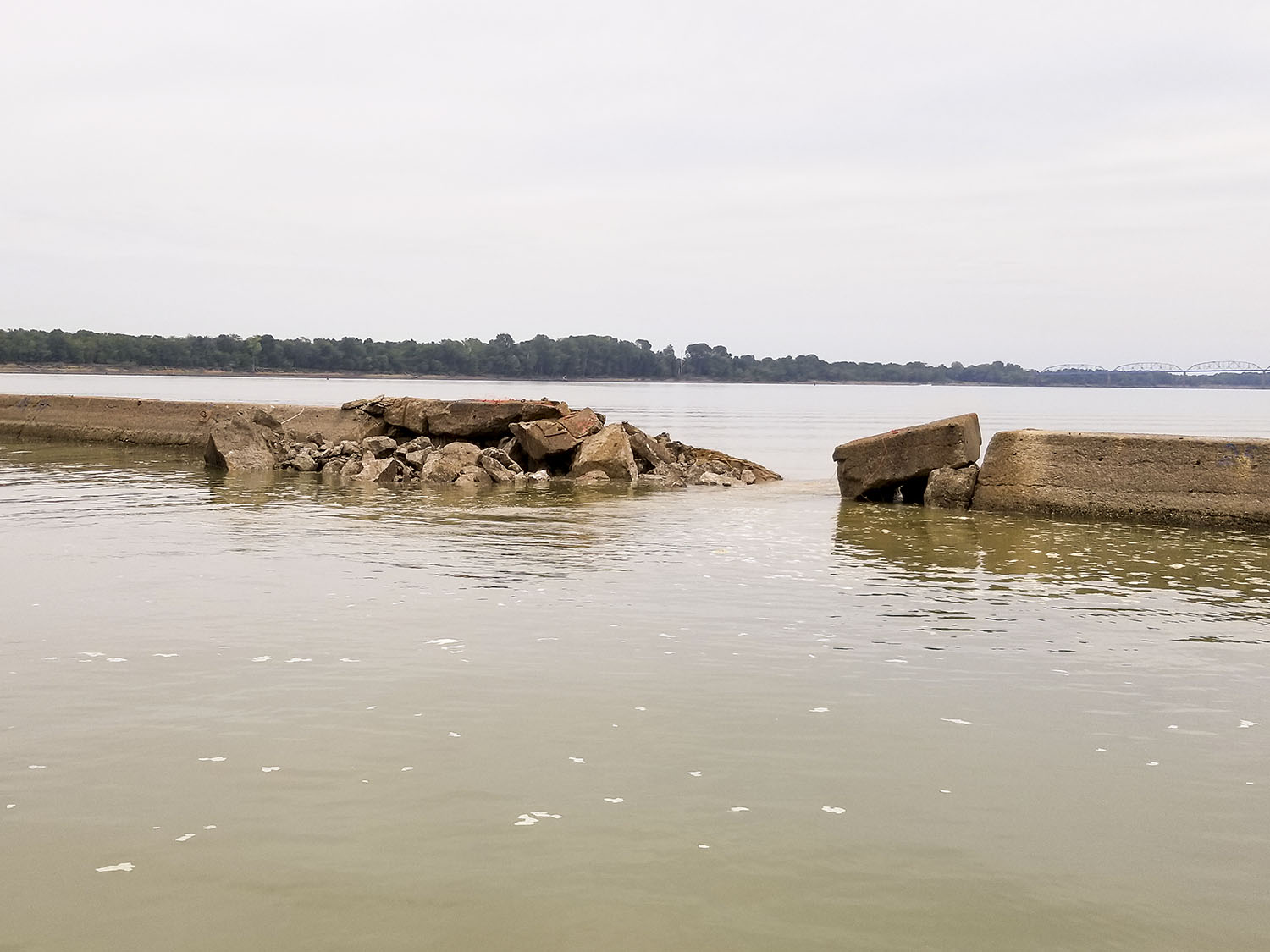 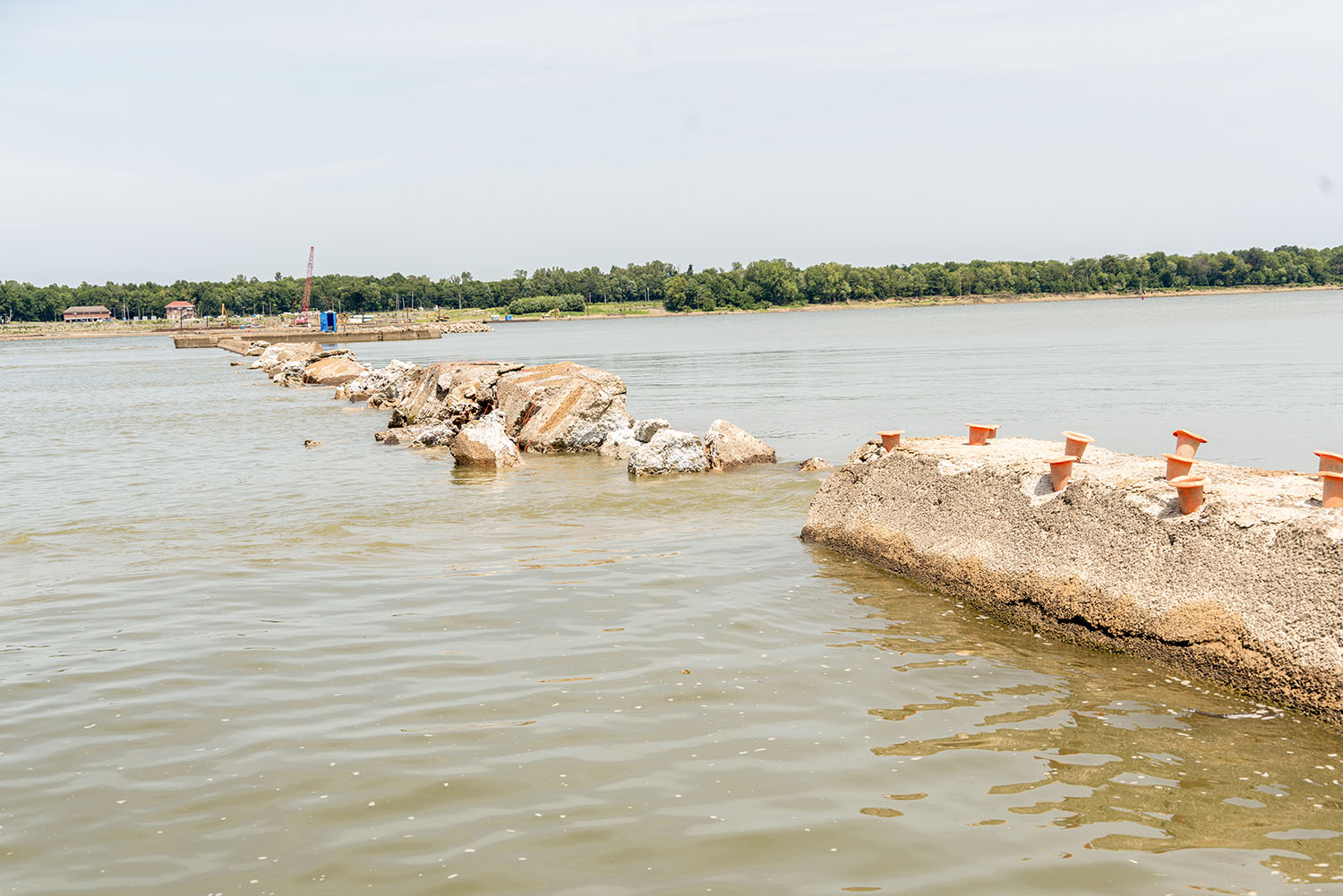 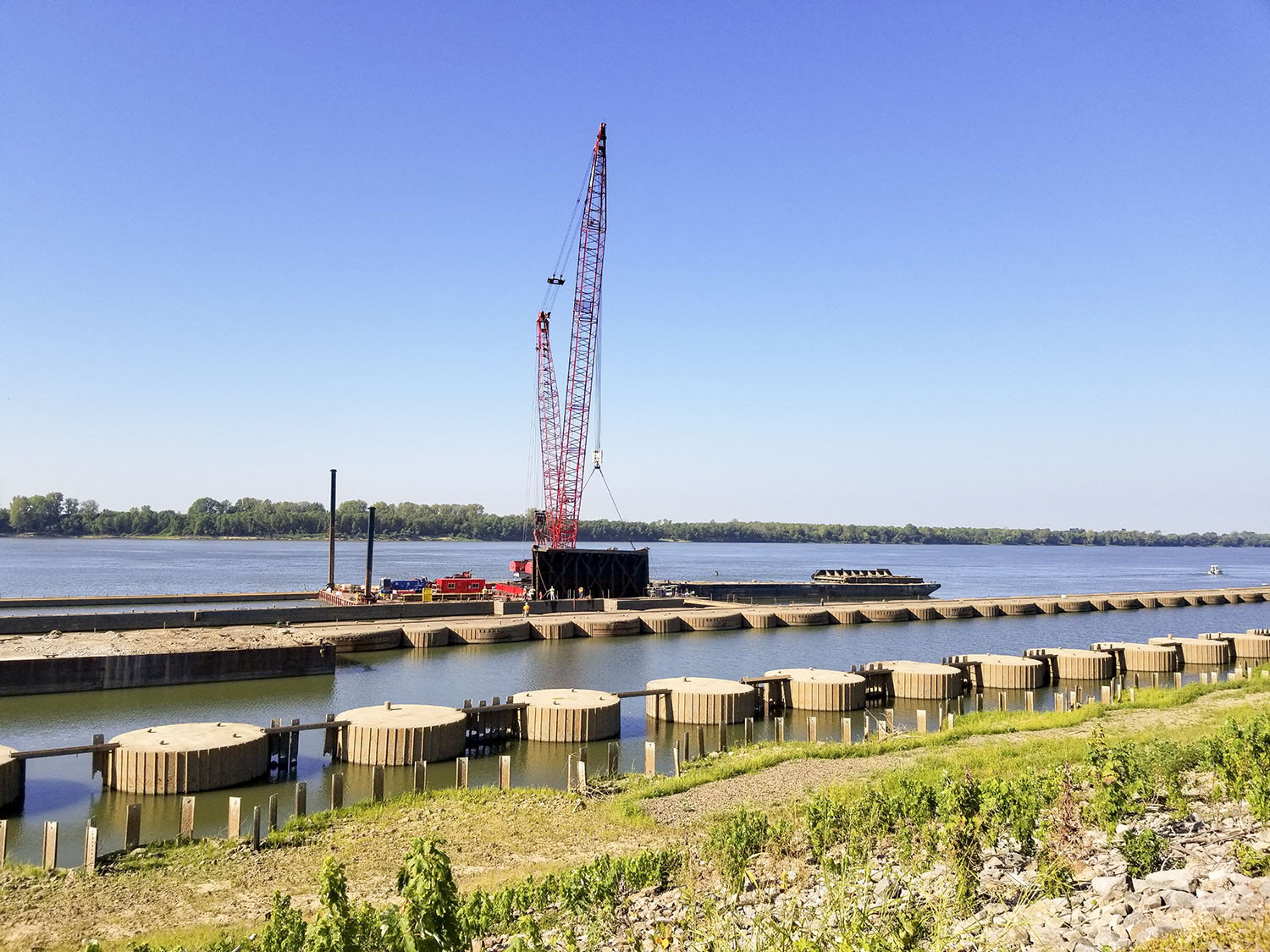 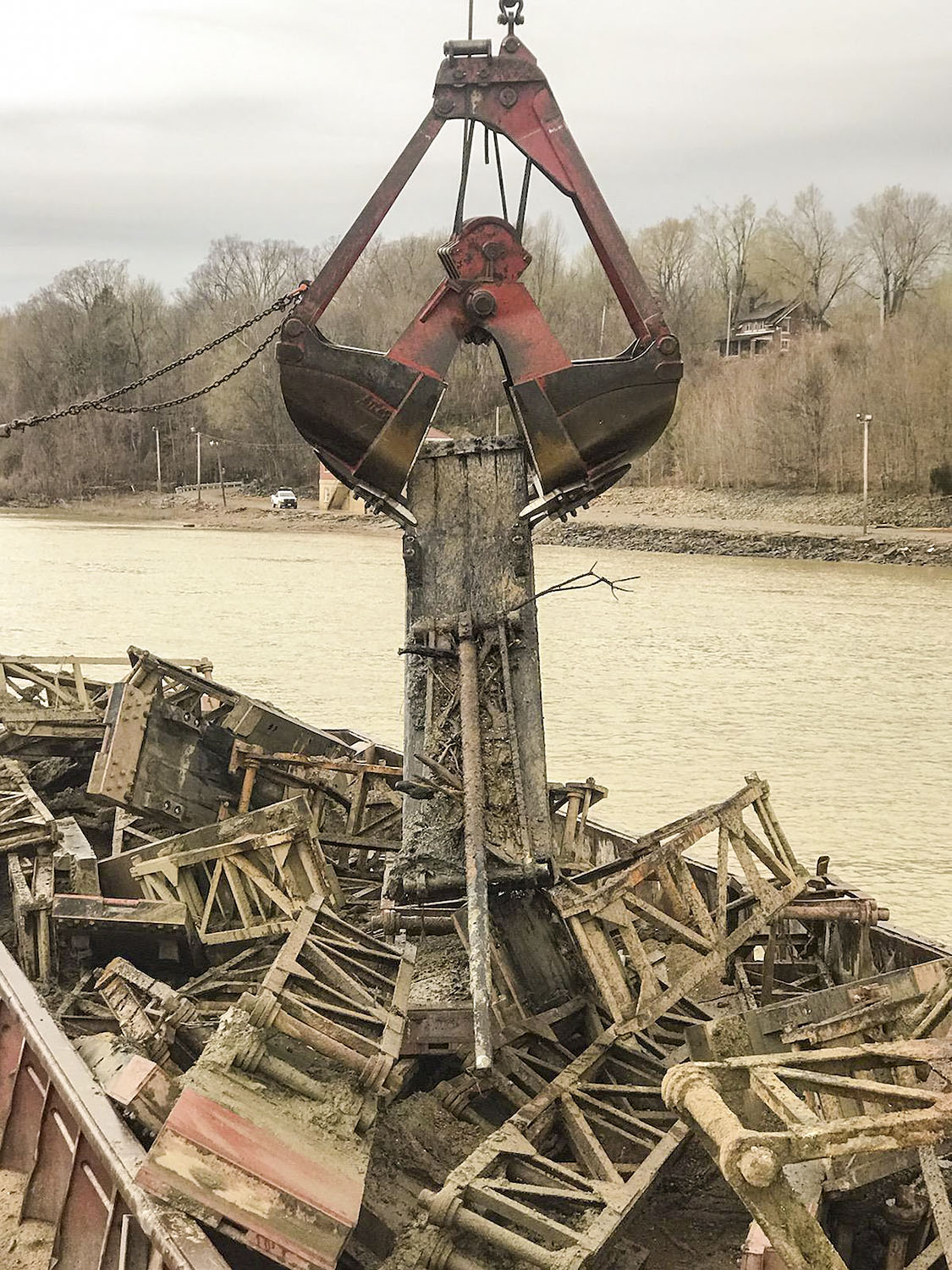 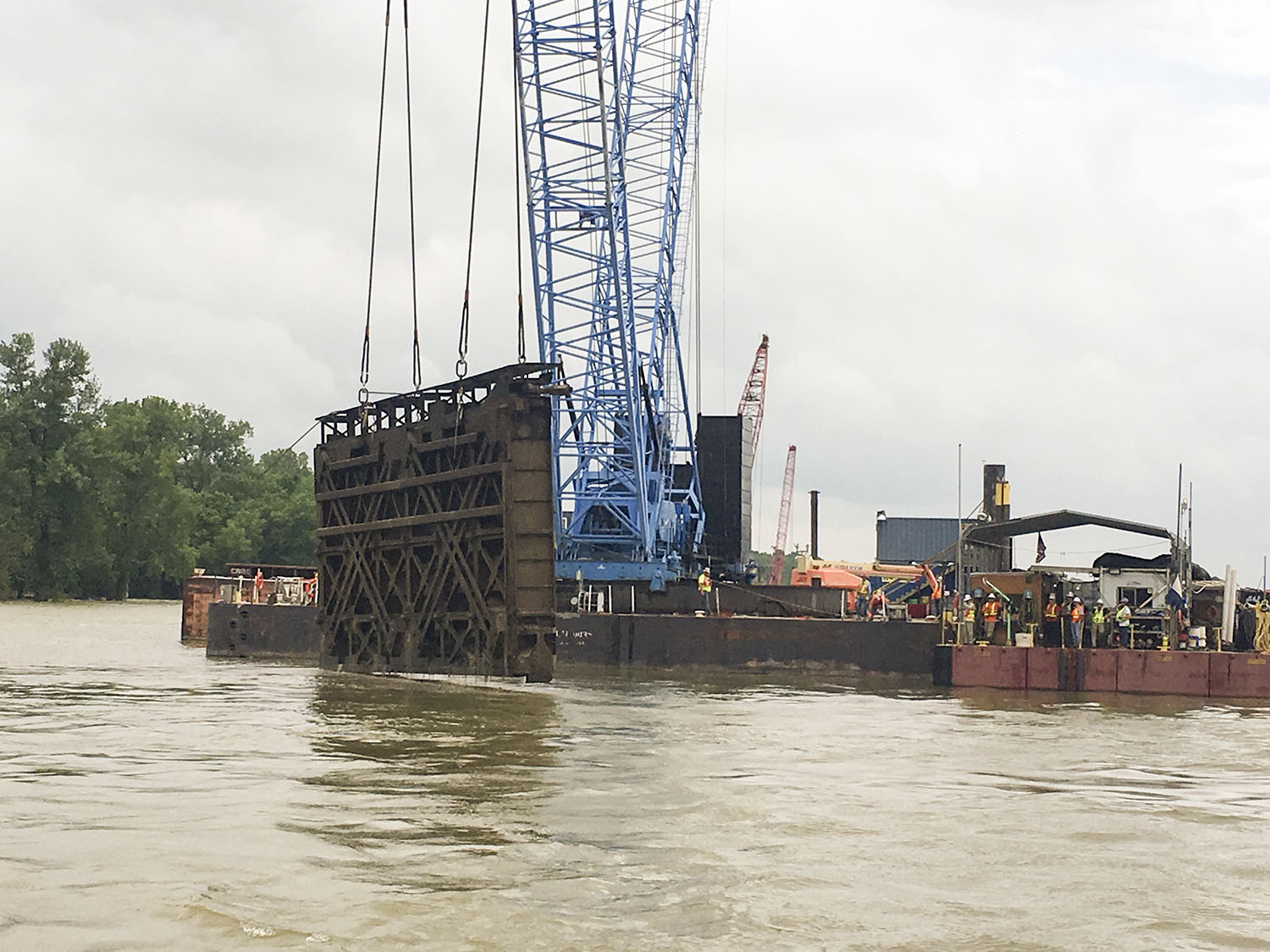