Congress continues to delay funding its 2007 authorization for replacing seven aging locks and dams in Missouri and Illinois that are crucial to competitively exporting soybeans and other grains on the Mississippi River through ports including New Orleans and Baton Rouge.

A new U.S. Department of Agriculture study warns that the failure to modernize these and other locks and dams increases costs of U.S. farm exports and helps Brazilian exporters close the cost gap with the United States. The study noted that U.S. barge traffic delays on the Mississippi and other rivers are rising as a result of growing lock and dam malfunctions: “the percentage of vessels delayed (is) increasing from 35% in 2010 to 49% in 2017.”

The $2.2 billion funding to replace the seven locks and dams is still in a pre-construction process in 2019, eighteen years after the feasibility study began in 1991 and twelve years after its authorization by Congress in 2007.

On August 28th, the National Grain and Feed Association (NGFA) and Waterways Council, Inc. (WCI) commended the U.S. Department of Agriculture (USDA) for releasing a significant new study that quantifies the cost-savings and competitive advantages that would accrue from investing in long-delayed improvements to the inland waterways locks and dams on the Upper Mississippi and Illinois River system.

The study, entitled, Importance of Inland Waterways to U.S. Agriculture, addresses the critical connection between the inland waterways and the competitiveness of American agriculture in global markets.

“USDA’s study underscores the inland waterways as a conduit to our nation’s agriculture competitiveness, as well as to overall U.S. economic prosperity. We believe the study makes the case to expedite the Navigation and Ecosystem Sustainability Program (NESP) that would modernize five locks on the Upper Mississippi River and two on the Illinois Waterway to be ready to capitalize on predicted grain shipments, while at the same time improving the health of our marine ecosystems and habitats,” said WCI President and CEO Mike Toohey who added: “NESP is awaiting Pre-Construction Engineering and Design (PED) funds to be ‘shovel-ready’ for these vital locks.”

The funding requests are for: “PED Funding in FY (Fiscal Year) 20, 21 and 22 of at least $10 million/year to advance activities on the Upper Mississippi River and Illinois Waterway.”

“NESP was authorized in 2007 for $2.2 billion to construct seven new 1200-foot lock chambers replacing the 1930s built, now antiquated 600-foot locks to improve efficiency for operators and shippers, particularly of agriculture products moving up-river and down-river to export. Five chambers reside on the Upper Mississippi River and two on the Illinois Waterway. With 60% of export grain shipped on the inland waterways system, these seven locks represent the majority of that grain tonnage. A nearly equal amount ($2 billion) was to go toward more than 300 ecosystem restoration projects. While the seven 1200-foot lock projects are located in Missouri and Illinois, additional NESP projects also are located in Minnesota, Wisconsin, and Iowa, all of which benefit other states in the Mississippi River watershed as well.”

The NESP lock and dam modernizations are in red and below: 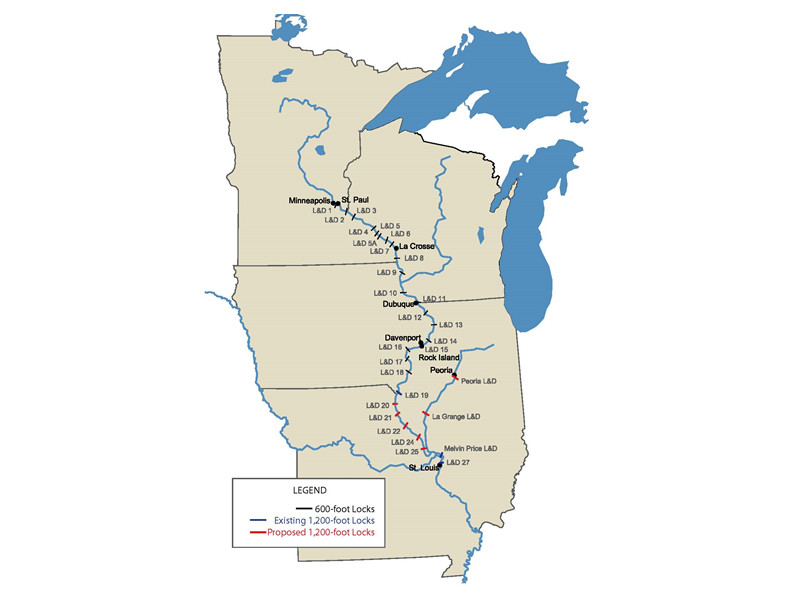 “We appreciate the leadership of Secretary Perdue and USDA in once again spotlighting the importance of the U.S. inland waterways transportation system to U.S. agriculture’s global competitiveness and farmers’ bottom lines,” said NGFA President and CEO Randy Gordon. “Very importantly, this study quantifies the significant cost of further delays in rebuilding America’s inland waterway infrastructure, and it’s not a pretty picture. Foreign competition from countries like Brazil is only increasing given current trade disruptions, and China is investing aggressively in South America’s transportation infrastructure to the United States’ detriment.

“The United States simply can’t afford to lag behind any longer,” Gordon continued. “This study is a wake-up call to the White House Office of Management and Budget and Congress to make the PED funding for NESP available this year, and to ensure growing investments are continued and expedited in the tremendous natural resource that America’s inland waterways represent.”

The highlights of the USDA report are as follows:

Historically, barge traffic has grown, but lagging infrastructure maintenance and improvement needs have resulted in more frequent delays, with the percentage of vessels delayed increasing from 35 percent in 2010 to 49 percent in 2017. Delays can cost up to $739 per hour for an average tow, amounting to more than $44 million per year.

The added costs associated with delays are ultimately borne by shippers, especially farmers, who will pay more (and in the case of farmers, get a lower price) for goods shipped on the inland waterways system. Higher costs also reduce the competitiveness of the river system.

Without consistent, predictable funding, “the grain and soybean export draw area around the waterways system could shrink from an average of 150 miles, currently, to as little as 75 miles under a constrained scenario, as the cost to ship on the river increases.” For corn, delays on the Mississippi River could have up to a $0.24 per bushel impact. The impact to soybeans could be up to $0.25 per bushel.

The U.S. currently has an advantage of $5.35 per metric ton over Brazil when shipping soybeans from Davenport, Iowa, to Shanghai, China, via the inland waterways system.

If the current navigation infrastructure spending trend is continued through 2045, the U.S. advantage declines to $3.03 per metric ton before any additional improvements in Brazil’s infrastructure are deployed.

With increased infrastructure investment in the U.S. inland waterways system, barge rates decrease, and the landed cost of grain at destination markets improves the U.S. advantage to $22.55 per metric ton over Brazil with all other items unchanged.

Due to its efficiencies and lower costs, the inland waterways system saves between $7 billion and $9 billion annually over the cost of shipping by other modes.

Shifting the equivalent volume of a typical 15-barge tow to surface transportation would require 216 rail cars or 1,050 trucks, leading to increased congestion of the rail and road systems.